A recent study has shown that just by watching advertisements of fatty food items in television or print media can trigger your brain’s craving to eat more. The research was revealed at ‘The Endocrine Society’s 94th Annual Meeting’. The study was conducted by research team that was pioneered by Kathleen Page from University of Southern California, LA, USA.

The research was done on 13 obese women by making use of functional magnetic resonance imaging (fMRI) technology to study their brain’s reaction when they were shown high calorie food items. It was observed that the areas in the brain that regulate appetite and reward were stimulated and they desired to eat those food items. 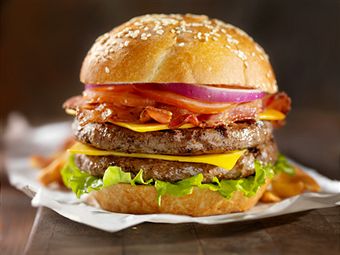 In the experiment, obese women were shown images of high calorie food items like burger and ice-cream, and low calorie items like oranges, apples, and broccoli. After viewing each set of photos, they were asked to rate the desire to consume those foods on a scale of 1 to 10. The subjects were also given about 50 gms of glucose and fructose beverage after showing each set of images.

Many television and print media commercials of popular fast food restaurants happen to show mouthwatering clippings and images of the foods they offer. The moment you see such commercials, you desire to go out and munch on such high calorie food items. This clearly shows that watching commercials of high calorie foods can be one of the many causes of obesity.

Obesity is a major global health concern. Even though you try to cut down your calorie intake and burn your calories by exercising regularly, it is not easy to give up your cravings for irresistible junk food. The study reveals how difficult it is for the people who are trying to shed off their extra weight if they continue to savor on junk foods. Even if you try your best to control your desire to stop eating junk, by looking at the commercials, you may again be tempted to eat a cup of ice-cream or hotdog.